The Dragon, the Beast, the Serpent, the Seven Gods of Chaos, Ogdru Eb Jurhad, the Seven Who Are One

Hellboy: Seed of Destruction #1
The Ogdru Jahad, also sometimes called the Ogdru eb Jurhad[1], are the Dragons of Revelation, and are destined to bring about Ragnarok, the end of the world. They were imprisoned in golden cocoons by the Right Hand of Doom shortly after the creation of Earth, but not before they spawned 369 children, known as the Ogdru Hem. They are the main antagonists of the Hellboy series.

Mostly inspired by the Great Old Ones of H. P. Lovecraft's Cthulhu Mythos (with some ancient Egyptian and Babylonian influences as well), the Ogdru Jahad are serpentine/crustacean entities which once resided on, and presided over, Earth. They are pitiless, chaotic, bent on destruction and subjugation and often so horrific in appearance that the mere sight of one of them sometimes induced madness. They are listed as follows:

In the beginning of time, God created an order of spirits. Of these, many of the greater spirits were sent to newborn Earth to oversee it as Watchers. One of these spirits, Anum, created the Ogdru Jahad out of fire and mud. The other spirits proceeded to set spells and wards about the Dragon, and even infused it with fire once again, but still the being remained lifeless. However, when night-time came, the Ogdru Jahad awoke and was instilled with purpose and function, giving birth to the Ogdru Hem who become Earth's first life forms. The watchful spirits, upon seeing the creation of these abominations, went to war with them. The Ogdru Hem were eventually all disposed of, with many of them barely clinging to existence in some fashion, with the Ogdru Jahad sealed by their creator in a prison of crystal and placed in the heart of the Abyss. The other Watchers, however, no longer trusted Anum and so they struck him down and destroyed all his remnants, save for one: his right hand. After that, God looked down in fury on what had happened, and exacted his retribution on the Watchers for botching their task: some were cast down into the pit, while others were stranded on the Earth to breed monsters.

Of the original spirits, many of the lesser ones were now given substance by God and took up residence on Earth as the Hyperboreans, the first race of men who predate humanity. Finding Anum's hand, they took it to the land of Hyperborea where it became a holy object and, at the request of their king Thoth, was attached to a great statue. The statue stood for ten thousand years, until finally Hyperborea became corrupted as a result of Hecate exposing what Thoth kept from his people. This leads to multiple cults dedicated to Hecate, whose horrific acts caused the statue to leave its place in Thoth's garden and slaughter the people before finally hurling itself over a cliff. The Hyperborean people soon faded into legends during the Ice Age, with some passing their knowledge to the second race of men (humanity) that emerged.

The hand of Anum, later renamed the "Right Hand of Doom" as it is the key to freeing the Ogdru Jahad from their prison and thus triggering the apocalypse, ended up in Hell where the demon Azzael had it grafted onto the arm of his newborn son Anung Un Rama before he was summoned by Rasputin who attempted to use the renamed Hellboy during the events of Seed of Destruction. Though the attempt failed, it set events in motion as the crystal prisons collided into each other. This event causes Hellboy to learn about his right hand, and make him aware that he must keep the hand as it would be more dangerous to try to rid himself of it. Attempts have already been made to separate Hellboy from his arm, both to protect the world and to hasten its destruction. Hellboy believes he is the best protection the arm can have.

While certain events have made it clear that the Right Hand of Doom is the Key to releasing the Ogdru Jahad, despite there being failures, the actions of Herman von Klempt summoning the Conqueror Worm and the frog monsters in conjuring Katha-Hem suggest that there are other conditions needed to be fulfilled for the Ogdru Jahad to make their return. During the events of The Fury, the Ogdru Jahad possessed the body of the Queen of Blood, in order for the woman to serve as their host through which they intended to prematurely return, to fight Hellboy before their host was killed in battle. But that event was revealed to be how the end of the world will begin and that the Ogdru Jahad have only been hindered and would appear in the world later in their full glory.

In the final stories of Hell on Earth, an Ogdru Jahad (later identified to be Nunn-Jahad), escapes from its crystal prison ahead of the other six and crash-lands in Argent, Kansas, decimating the surrounding region for miles. Nunn-Jahad immediately spawns a number of Ogdru Hem as both the SSS and the B.P.R.D. mobilize. Liz and Johann destroy the Ogdru Hem but are unable to damage the dragon itself, forcing a retreat. Its arrival also links it to the psychic network that powers The Black Flame. After the Black Flame is defeated, Nunn-Jahad begins moving, bringing with it a storm of fire and lightning. It spits out dozens more Ogdru Hem by the hour, overwhelming Liz and Johann's attempts to stymie the tide. The army fires every available nuclear warhead at it and it survives unscathed. It eventually passes by B.P.R.D. headquarters and destroys it with a fireball that kills Kate and Panya. Afterwards it is confronted by several Watchers from Hell, who have been summoned by Varvara. Despite their efforts, Nunn-Jahad incinerates them. The dragon is finally destroyed when Johann channels the infinite power of Vril to shatter it, sacrificing himself in the process. With its death, Ogdru Hem around the globe cease moving or showing any signs of life, giving the world a small respite.

The Ogdru Jahad are finally killed when the Osiris Club harnesses the power of the Right Hand of Doom to pull their crystal prison out of the Abyss, which they hurled onto the Earth like an asteroid. The resulting impact wiped out the Ogdru Hem, who at that point in time ruled the planet. Their life force was drained by the Hand and the Osiris Club planned to use their power to become gods, but the spirit of Hellboy arrived to reclaim the Hand and destroyed them.

As an immortal and vastly powerful entity whose true nature defies description, with even its nature as multiple beings being ambiguous, the motivations of the Ogdru Jahad may not be possible to represent in human terms. As such, the human and quasi-human inhabitants of the Hellboy universe have expressed a variety of opinions on what the Ogdru Jahad wants beyond freedom, which it desires above all other things.

From the varied attempts of Rasputin and Project Ragna Rok to free the Ogdru Jahad, it is readily apparent that their release is closely tied to the fall of mankind. But the question of mankind's fall varies: Herman von Klempt believing the Ogdru Jahad would be released by the freed Ogdru Hem once man has been destroyed. A common vision all share is that the Ogdru Jahad will do something akin to "burning the earth to a cinder" so it is possible they are all referring to some common vision of the dragon's release but are guessing at how the prophecy is fulfilled.

Beyond that, there is much dissent as to precisely what the Ogdru Jahad will do upon release. The aliens that watch the cosmic prison of the Ogdru Jahad apparently perceive Earth as a focal point necessary to maintaining the prison. If the Ogdru Jahad are released, they will destroy Earth and then the entire Universe. Rasputin, is given the notion that desire of the Ogdru Jahad is to create a new, perfect world out of the ashes of the old one, where the final race of man will live. Both Hecate, who sees herself by Hellboy's side as the world ends, and the Daoine Sidhe concur that humanity will be replaced by a new race. The Ogdru Jahad, through the Ogdru Hem, make attempts to create the new race in the form of Frog monsters, though they are a flawed form compared to Abraham Sapien.

The following chant has been performed by Rasputin and Nimue:

"Chained in Heaven they are. Seven is their number. Bred in the depths of ocean, neither male nor female are They. They are as the howling wind, which knoweth not mercy, which knoweth not pity. Heedless are they to pray and supplication. They are the Serpent. They are the furious Beast. The Windstorm. Evil wind they are. The evil breath that heraldeth the baneful storm. They are mighty children. Herald of Pestilence. Throne Bearers of Ereshigal. They are the flood which rusheth through the land. Seven Gods of might. Seven demons of oppression. Seven in heaven and Seven on Earth. Of giant strength and tread they are. Knowing no care they grind the land like corn. Knowing no mercy they rage against Mankind, to spill blood like rain and devour flesh. Let the seven now rise from the Abyss. Away be cast all chains. Freedom is to them. Power is to them."

In other media[edit | edit source]

In the film Hellboy, the Ogdru Jahad serve as the over-arching enemy of the film, mentioned only a few times by name. They appear as vaguely cephalopod-like, resembling more their Lovecraftian influence. They are encased in their crystal shells somewhere in outer space. Rasputin, Kroen and Haupstein managed to get Hellboy to use his Right Hand of Doom to start the End Times, by holding Liz Sherman. Agent John Myers still managed to get Hellboy back to his senses and he decided to stop before opening the final lock. The Seven Gods of Chaos were trapped again, but one of their offspring, Behemoth, managed to enter the world, but Hellboy managed to kill him as well.

The creatures were described by Wayne Barlowe.

In Hellboy: Sword of Storms, the Ogdru Jahad (or possibly Ogdru Hem) made a cameo as the brothers of Thunder and Lightning. Though not mentioned by name, they were referred to as the "Dragons".

One of the seven Ogdru Jahad.

Ogdru Jahad possessing and turning Nimue into a dragon.

Nunn-Jahad is destroyed by Johann Kraus. 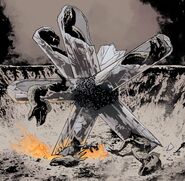 The Ogdru Jahad arrive on Earth, dead.
Add a photo to this gallery

Retrieved from "https://hellboy.fandom.com/wiki/Ogdru_Jahad?oldid=27631"
Community content is available under CC-BY-SA unless otherwise noted.