Hellboy Wiki
Register
Don't have an account?
Sign In
Advertisement
in: The Ogdru Jahad and their Agents, Species, Ogdru Hem,
and 9 more
English

Many of the Ogdru Hem are without bodies and exist, invisibly, in the air. These evil spirits are used to help raise the Ogdru Hem that have bodies (such as Katha-Hem) out of their earthly prisons.

The physical form of at least one Ogdru Hem (Sadu-Hem) has, under study, been revealed to be a kind of fungus. This body was created out of blood at some point in the distant past, leaving it unclear if the same holds true for the original bodies created by the Ogdru Jahad.

All of the Ogdru Hem can mutate living creatures with their breath, with the most common example being Frogs. It is possible that this is the result of spores.

In ancient times some of the Ogdru Hem took the forms of dragons inspiring many myths on Earth.

The Visitor dealt with most manifestations, but a few evaded him. Rasputin awakened Sadu-Hem, but it was destroyed by Liz Sherman. Later Herman Von Klempt revived the Conquerer Worm, which was destroyed by Roger, Hellboy, and Lobster Johnson. Hellboy later fought and killed a revived Urgo-Hem. After Sadu-Hem began to regenerate, he was captured and allowed to grow by BPRD researchers before being freed by cultists and allowed to create a large number of frog monsters. These would later summon large numbers of Ogdru Hem spirits, but it is doubtful many of them regained physical form.

Landis Pope later fulfilled the frog prophecy of the Black Flame and awakened Katha-Hem, who was said to be able to make the world begin to change. It is possible that this caused a rise in Ogdru Hem appearances, though other factors such as the presence of the Right Hand of Doom on Earth and the crack Rasputin and Sadu-Hem put in the Ogdru Jahad's prison may have played a role. Although Liz Sherman defeated Katha-Hem, Landis Pope survived and began reviving Ogdru Hem instead of awakening them, with help from the King of Fear and his machines. Although all of these were destroyed by LIz Sherman, the Salton Sea Monster crawled out of the ocean soon after, marking the beginning of Hell on Earth. 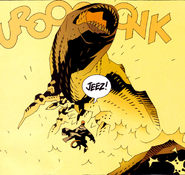 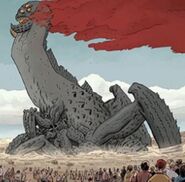 There have been several creatures that have been connected to the Ogdru Jahad, but have not been said to be Ogdru Hem.