In the film, a demonic child, rescued by Allied forces after being summoned to Earth by Nazis during WWII, grows as an adult to protect the world from supernatural threats from within a top-secret government organization.

In 1944, with the help of Grigori Rasputin, the Nazis build a dimensional portal off the coast of Scotland, intending to free the Ogdru Jahad, monstrous deities imprisoned in deep space, to aid them in defeating the Allies. An Allied team is sent to destroy the portal, guided by a young Trevor Bruttenholm. The Nazis are killed and the portal destroyed, taking Rasputin with it, while his servants Ilsa Haupstein and Karl Ruprect Kroenen escape. The Allied team discovers that an infant demon with a right hand of stone came through the portal; they dub him "Hellboy" and Bruttenholm adopts him.

Sixty years later, FBI agent John Myers is transferred to the Bureau for Paranormal Research and Defense (BPRD) at the request of Bruttenholm, where he meets the adult Hellboy and the amphibious humanoid Abe Sapien. He learns that a third BPRD member, Liz Sherman, has recently checked into a mental hospital to protect others from her volatile pyrokinetic abilities. Despite regular visits and coaxing from Hellboy, she is determined not to return. Kroenen and Haupstein resurrect Rasputin in the mountains of Moldova and the three unleash the hellhound Sammael. Rasputin imbues Sammael with the power to reincarnation, allowing two of the creature's eggs to hatch each time one dies. Rasputin visits Liz as she sleeps, activating her powers and almost destroying the hospital. Myers convinces her to return to the Bureau.

As Sammael's ability to multiply becomes a problem, it is concluded their eggs are in the sewers, and Hellboy, Abe and several BPRD agents go down to destroy them. Abe is injured while searching for eggs, while Kroenen kills most of the agents. Kroenen, whose undead body is run by clockwork mechanisms, shuts himself down, pretending to be dead as his body is brought to bureau HQ. While BPRD director Tom Manning is angered by Hellboy's recklessness, Myers takes Liz out for coffee. Hellboy, jealous, covertly follows them, leaving HQ unguarded. Kroenen then reanimates himself and Rasputin reappears at the bureau, confronting and finally killing Professor Bruttenholm.

Manning takes over the BPRD and locates Rasputin's mausoleum in an old cemetery outside Moscow. A team led by Manning and Hellboy enter the mausoleum, but quickly become separated. Hellboy and Manning find their way to Kroenen's lair and defeat him. Hellboy reunites with Liz and Myers at Sammael's new nest, but the creatures overwhelm them. Liz uses her pyrokinetic powers to incinerate the Sammaels and their eggs. Hellboy, Liz and Myers lose consciousness and are captured by Rasputin and Haupstein. As Rasputin sucks Liz's soul from her body, he tells Hellboy to release the Ogdru Jahad in return for her soul. Hellboy awakens his true power as Anung un Rama, the Beast of the Apocalypse, and begins to release the Ogdru Jahad by entering his stone right hand, the Right Hand of Doom, into a massive stone monolith recovered by Rasputin. Myers breaks out of his restraints, subdues Haupstein, and reminds Hellboy that he can defy his destiny. Remembering his true self, Hellboy breaks off his regrown horns, reseals the Ogdru Jahad and stabs Rasputin with one of the broken horns.

A tentacled Behemoth bursts out of Rasputin's dying body and grows to immense size, crushing him and Haupstein. Hellboy allows himself to be swallowed by the beast, detonating a belt of hand grenades, destroying the creature from the inside. He returns to Liz, whispering something in her ear, returning her soul. The film ends with Liz and Hellboy sharing a kiss while engulfed in Liz's gentle flame.

During the opening sequence of the film, Sgt. Whitman and several other soldiers use M1 Garands. 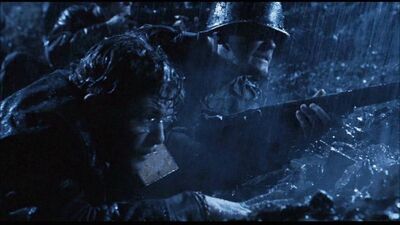 Retrieved from "https://hellboy.fandom.com/wiki/Hellboy_(2004_film)?oldid=25692"
Community content is available under CC-BY-SA unless otherwise noted.