Demons are a race of supernatural beings who delight in evil, violence, and chaos. Demons reside in Hell but can travel to and from the Earth. They do this frequently so as to cause all manners of mischief and evil upon the human race.

There are numerous ranks and titles amongst demons. The chief amongst them is Satan, the ruler of Hell who rebelled against God and was cast into the Abyss to forever dwell in chains and fire. However, Satan refused to be bound by his fate and declared himself a king while building up his city of Pandemonium. Satan has spent the last 2000 years sleeping in his chamber underneath Pandemonium, before his murder by Hellboy.

Below Satan, the hierarchy amongst demons is believed to be:

The demons were originally angels, but as God asked them to bow down to humanity, they rebelled. They were led by Satan, who sought to become a new God, but they were all cast down to Hell.

In Hell the demons battled the original fallen angels, the Watchers, enslaving them and using them to built the city of Pandemonium.

For centuries demons have tried and managed to get humans to sin or sell their soul and come to Hell. They often serve as the masters of witches, promising magical powers and worldly gifts.

After Hellboy died, he ended up in Hell, meeting the rest of his demonic kin. He ends up killing Satan, and after the death of Astaroth, Hell falls into chaos.

Many minor slave demons begin to rebel against their masters which leads to death of high-ranking demons such as Shax, Usiel, Raum, Semyaza, Moloch, Belial and Dagon.

The remaining high-ranking demons, led by Beelzebub, gathered at his castle and planned a counter-attack. Hellboy arrived, as a ginormous towering demon, followed by countless slave demons. Hellboy vanquished both Leviathan and Behemoth, while Beelzebub and his followers were killed by the angry slaves.

The three last high-ranking demons, Yomyael, Balam and Bifrons, managed to bind the slave-demons and summoned them on Earth. They sought to rebuild Pandemonium on Earth and rule over humanity. This plan fell through though, and all three were killed by the B.P.R.D., though some of the slaves survived.

All remaining demons fell to serve the Ogdru Hem, becoming slaves to them and Grigori Rasputin. They, alongside the Hammerheads and Frog monsters, started to chase remnants of the humanity, trying to wipe them out.

The demons, alongside all monsters created by the Ogdru Hem, perished when the Ogdru Jahad were killed by the Osiris Club.

There is much variation as to how demons appear.  While most appear to follow some basic patterns such as glowing eyes, horns, and wings this is subject to change as demons are shape-changers and can appear in the form of man, beast, or some cross between.

The more minor demons seem to have a uniform appearance. They are smaller creatures with red skin, horns, wings, and a skull-like face. 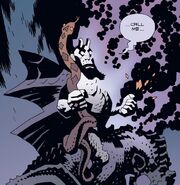 Azzael, Prince of Sheol and father of Hellboy 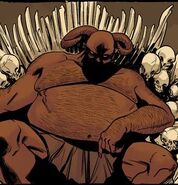 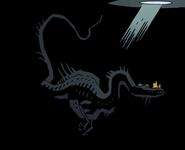 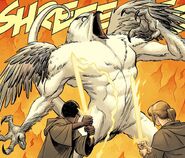