Hellboy Wiki
Register
Don't have an account?
Sign In
Advertisement
in: Deities, Mythical Creatures, Based on mythology, theology, folklore and literature,
and 2 more

Deities, also known as Gods or Goddesses, are powerful beings worshipped by humans and other lesser beings.

The most powerful and first god was the self-created and omnipotent power simply known as God. The other gods are usually viewed as lesser gods, fallen watchers, demons, fairies, Ogdru Hem, aliens or exaggerated humans. 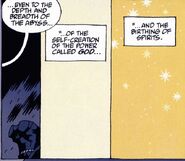 God, creator of the universe and all within it. 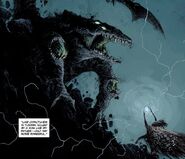 Ereshkigal, possibly an antithesis to God, possible creator of Hecate and the Ogdru Jahad 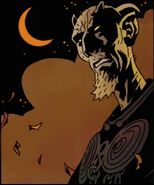 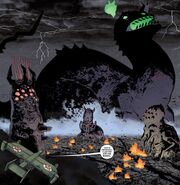 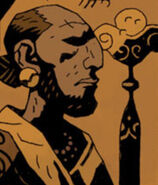 Thoth, actually the last King of the Hyperboreans.

Hecate, possibly an avatar of Ereshigal 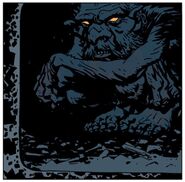 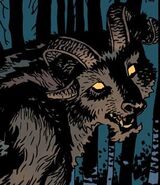 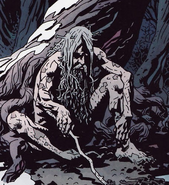 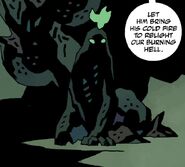 Mentioned and seen through art or a vision[]

Coatlicue was an Aztec deity, who was described as the great mother and a snake goddess of the moon. She was only mentioned and seen in a vision within Abe Sapien: The Shape of Things to Come within the context of Mesoamerican creation and eschatology, so whether she actually exists is unknown.

She might have been an Ogdru Hem, since Vucub Caquix and Cipactlhem were confirmed to be ones in the same story, though she could also just be an avatar of Hecate as well, similar to Kali.

Dagon was a Philistine deity of fertility and in fact was a demon, who was mentioned in The Spanish Bride. He was likely turned into a demon, as the Philistines were enemies of the ancient Israelites and as a possible reference to Paradise Lost.

After the death of Satan and Astaroth, the slave-demons started to revolt against their masters, killing many of them. Dagon is mentioned by three surviving demons, alongside Rumael, Shax, Usiel, Raum, Semyaza, Moloch and Belial.

Dagon has often been depicted as a fish-man (similar to Oannes), though this is often seen as as translation-error, that was then popularised by works of fiction such as John Milton's Paradise Lost or H.P. Lovecraft's Cthulhu-mythos.

Durga is the Hindu goddess of motherhood as well as victory of good over evil. She was depicted in the her classical form within an issue of Occult Intelligence.

He name has been also referenced by exorcists, such as Ota Benga during the events of B.P.R.D.: 1947 and Ashley Strode during the events of B.P.R.D.: The Devil You Know—Pandemonium. He name was mentioned alongside other deities and beings, such as God, Jesus Christ, Archangel Michael, Indra, Agni, Baal-Hadad, Marduk, Ea, Shamash, Utu, Anu, Zeus and Taranis. Ota Benga seemed to think all of them were simply other names for God.

Horus was an Egyptian deity of kingship and the sky. He was notably referenced in the story The House of Sebek, where he was both mentioned and seen as a statue.

Within the story Horus was mentioned by a crazed gift shop clerk, claiming to be the Pharoh Thesh, who prayed to a statue in of the deity. This happened in the Temple of Sebek, which angered the other deity and who then devoured him. Hellboy referred to Horus as "the one with the bird-head".

Whether Horus actually exists in any form within the Mignola-verse is unknown, but it seems likely as the crazed gift shop clerk's prayers to the god seemed to anger the very real Sebek. Members of the Osiris Club also sometimes dressed as Horus during the ceremonies and rituals.

Odin was one of the old norse deities and the father of Thor.

During the events the Fury, as Hellboy approached Nimue, the witches present thought originally he Odin, since he wore a robe and had only one eye, which was characteristic of the old deity. In truth Hellboy had given up his one eye for the Baba Yaga, so that head could sneak through Nimue's army undetected.

As Hellboy was in In Hell, his uncle Astaroth mocked him for his missing eye, stating that at least Odin had gotten knowledge after giving one his own up.

Osiris was the Egyptian god of the underworld, fertility and kingship, who was also the father of Horus.

The Osiris Club is named after him, which was a splinter group frormed the larger Heliopic Brotherhood of Ra on the September 2nd, 1866. A statue of the god was often seen in the headquarters of the club and he was possibly tied with the enigmatic spirit of Larzod, who was tied to the founding of the organisation.

The members of the Osiris Club likely seemed to achieve godhood similar to their namesake, mainly by harnessing the power of the Ogdru-Jahad, which ended in disaster for them in the end.

Ra was an important solar and creator deity from Egyptian mythology, that was worshipped by the Heliopic Brotherhood of Ra, who invoked him as either Amun-Ra or Atum-Ra.

In the 2019 film-adaptation of the comics, when Trevor Bruttenholm is discussed the Osiris Club and Heliopic Brotherhood of Ra with Hellboy, the demon claimed he had encountered Ra in the underworld and described the god as someone who would drool quite a bit while talking.